Posted by Benjamin Porter on January 23, 2020 in Splendid South Africa, Travel Info & News | Comments Off on What are South Africa’s Big Five?

That is a question that could be answered in a variety of ways……but the Big Five we are speaking of we hope to see on our upcoming tour, Safari South Africa.

In the animal kingdom of Africa, there is the term for the “Big Five”—which are the Elephant, the Lion, the Leopard, the Cape Buffalo, and the Rhinoceros.

They are not called the Big Five because of their size—though they are certainly big. In the days of hunting on foot, these five animals were the most dangerous and could turn and charge the hunters. It was the dream of the trophy hunters “to bag” these Big Five animals.

These days on our small group tours, we seek a gentler, kinder interaction with the Big Five. We want to enjoy and observe them—to experience and admire them in their natural habitat—-while we still can. Yes, these animals are in danger and threatened by poachers. African Elephants communicate across large distances at a low frequency that cannot be heard by humans. They are vegetarian and are the largest land animal….and their closest relatives are rodents!

When Teddy Roosevelt embarked on an African hunting expedition over one hundred years ago, he was quoted as saying “the African elephant would never become extinct”, due to the sheer number he encountered. Flash forward to current times and most of the Big Five animals are currently listed as “vulnerable” or “endangered” species. Although hunting of all these animals is still allowed to some degree, Africa has put strict laws in place to protect and conserve each species. However, poaching continues to be a problem.

Elephants have shock-absorbing pads on their feet that allow them to walk much more quietly than you’d believe of such enormous creatures. They also have rather delicate skin than can sunburn and get irritated by even an insect! They are avid swimmers and can swim long distances using their trunks as built-in snorkels. And these social creatures mourn dead members of their herd with rituals that can last days. Lion sightings are impressive as lions are very social and live in groups called ‘prides’ so you may well see more than one at once.

They don’t spend a lot of time hunting. Lions can sleep up to 20 hours a day! But when they are awake you’ll know about it.  A lion’s roar can be heard up to 5 miles away! This helps communicate with the rest of the pride; calling for stray members back, declaring territory, and for females, communicating with cubs and calling for help when threatened.

The lion is a skillful hunter with incredible power and speed. Its eyesight is like no other, and it also has excellent hearing and sense of smell. Lions are also highly social animals. In the lion family, male lions eat first, yet it is the females that do most (if not all) of the chasing and hunting. There are estimated to be less than 20,000 lions left in the world, and the International Union for Conservation of Nature (IUCN) has listed them as ‘vulnerable’. Rhinoceros look fierce, almost armored are like an immovable wall.

In fact, they run much faster than you’d think (up to 30 mph!) – and they run on their toes. Rhinos have three hoofed toes on each foot, and they graze on leaves and twigs, just like their relatives: horses and zebras. Rhinos don’t have any front teeth and use their lips to pick up their food. Much more dainty than they look. Rhinos have poor vision and will sometimes attack trees and rocks by accident. However, their hearing and sense of smell are excellent, thus often making up for their poor eyesight.

The rhino is the most endangered species of the Big Five. There are only 29,500 Rhinos left on earth, with 70% of them living in South Africa and hence are listed as critically endangered by the IUCN. Rhino poaching worldwide hit a 15-year high in 2009. The illegal trade is being driven by an Asian demand for horns, made worse by increasingly sophisticated poachers who are now using veterinary drugs, poison, cross bows and high caliber weapons to kill rhinos. Very few rhinos now survive outside national parks and reserves. 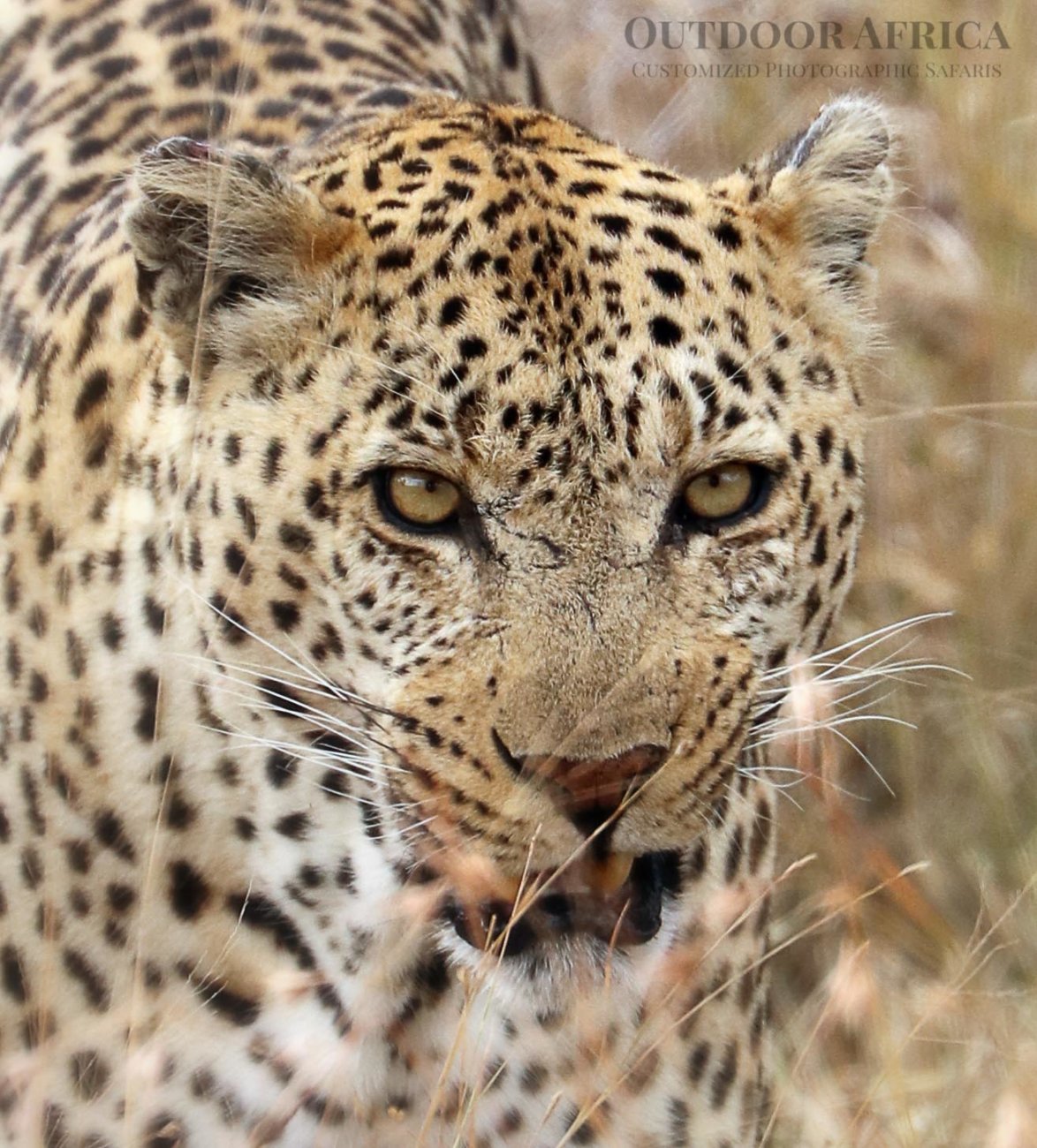 The Leopard is the least seen of the Big Five as it is the most nocturnal.

Unlike lions, leopards are not social and spend most of their lives alone. They are like the superhero of the big cats: they are sleekly graceful and almost perfectly camouflaged in the dappled shade of trees; they have excellent night vision and are incredibly powerful, able not only to regularly climb trees, but to drag prey 3 times their own weight 20 feet high into trees to protect their dinner… and they are even strong swimmers who sometimes fish! They occasionally eat crabs, too. Even feline superheroes need a break, though. Leopards are known to take naps in the treetops. Listed as ‘vulnerable’ by the IUCN, the leopard’s only real predators are humans. In additon to being expert climbers, they are graceful and have extraordinary hunting capabilities. They are very solitary and shy, which makes it even more rewarding when “spotted”. The African or Cape buffalo is not believed to be closely related to the water buffalo even though they superficially resemble each other.

And unlike the water buffalo, the dangerous African buffalo has never been domesticated. Usually considered the most dangerous of the five to hunt due to its unpredictable behavior, the Cape Buffalo is nicknamed “Black Death” and the “Widowmaker”. The Cape Buffalo has few predators, namely humans and lions, and will fiercely defend itself if threatened. They are sometimes reported as killing more humans than animals. The Cape Buffalo is also the most plentiful and is not on any threatened, vulnerable, or endangered list. Their current population is 900,000, with 4 different sub-species, and 75% of the population exists in protected reserves.

They have excellent memories, even ambushing creatures who have previously attacked them. Lions are their number one natural predator. But it will still take several lions to take down a Cape buffalo, risking the fury of the rest of the herd, which will ferociously defend and rescue fellow buffalo and kill lions who have attacked one of their own.

Now, you have met a few of the animals we will see on our Safari South Africa. We have selected 3 unique reserves for this once in a life time experience. Many people have heard of Kruger National Park–and though it is wonderful, it is also the largest and most visited. We will find our animals at these three less crowded parks & reserves: Tembe Elephant Park, Hluhluwe-iMfolozi, and Somkhanda.

We have a few places remaining and look forward to the pleasure of your company!